At some point during the offseason, I received an e-mail from the Lakewood BlueClaws asking fans to submit pictures of their dogs in connection with the team's 2018 Bark in the Park promotion.  The pictures would be featured on a special jersey to be worn by the players and coaches for the game, and I immediately e-mailed the team a picture of our dog Chewbacca.

Fast forward to last night, and we made the 90 minute trek to Lakewood to watch the BlueClaws play with a collage of dogs, including our very own Chewbacca, on their uniforms.  Chewbacca officially becomes the first member of our family to appear on a jersey in a professional baseball game.  He has promised not to let this go to his head.


The BlueClaws lost the game, 4-2 to the West Virginia Power, but we once again had a blast.  Doug went to work before the game scoring autographs while Ben was happy to just get his picture taken with some of the players.  Both boys came away with baseballs with Doug getting tossed a ball from catcher Rodolfo Duran and Ben getting a ball of his own from coach Milver Reyes.

The BlueClaws auctioned off the special dog jerseys during an in-game silent auction, and we bid on and won three of the jerseys.  (As an aside, I probably got a little over ambitious and paranoid with my bidding as we wanted to make sure we brought home at least one of the jerseys and of course we ended up with three.  My initial paranoia aside, I was happy that proceeds from the auctions went towards BlueClaws Charities.)  We won the jerseys of outfielder Josh Stephen (#8), infielder Daniel Brito (#21) and coach Tyler Henson (#9).


Following the game, we were invited to the indoor batting cage area to pick up the jerseys, meet the players and get even more autographs.  The entire team was seated at tables circling the room, ready and willing to sign anything handed to them.  When all was said and done, both boys came away with baseballs autographed by the entire BlueClaws team and Doug also managed to get the players to sign a BlueClaws mini bat.  What an amazing experience and the ride home in a torrential thunderstorm gave all of us plenty of time to reflect on the cool night we had just shared.

For posterity's sake, I've created several limited edition Chachi insert cards and I also wanted to list the full roster below to help the boys identify the autographs they gathered on their team balls (and bat).  Thanks again to the BlueClaws and Bark in the Park! 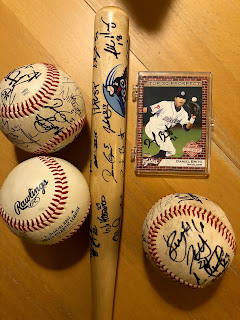 That's just a phenomenal outing! Congratulations on winning the jerseys.

Building memories that will last a lifetime!

That's one of the coolest things ever! I definitely would have ended up with multiple jerseys just trying to get one. So neat that instead of handing you the jerseys, they brought you in for the special autograph session. Definitely a well thought out promotion.

What a great night for the family—and cool to have a jersey with your dog on it too!

I can not recommend an outing to a Lakewood BlueClaws game enough. We've had nothing but good times and great memories at the games we've attended.

And Chewbacca is trying to stay humble.