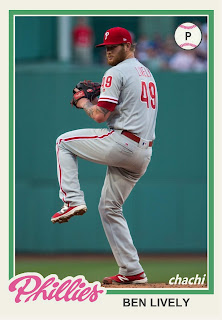 First Mention on The Phillies Room:  January 1, 2015 - It's fitting that the first full post of the new year features the latest veteran departure from the under performing 2014 club. Yesterday afternoon, the Phillies traded outfielder Marlon Byrd (and cash) to the Cincinnati Reds for pitching prospect Ben Lively.  The big squad sure isn't getting any better, but the Phillies' Double-A team should be fun to watch this year with Aaron Nola, Zach Eflin, Tom Windle and Lively slated to be the Fightin Phils' top four starting pitchers.

Byrd was one of the better offensive performers for the Phillies in 2014, hitting .264 in 154 games with 25 home runs and 85 RBIs. Although his 185 strikeouts were second only to Ryan Howard's 190 to lead the National League.

Lively joins Endy Chavez in the exclusive club of players the Phillies received in trades for Byrd. The right-handed pitcher had cards in this past year's Topps Heritage Minors, Bowman Chrome and Bowman Draft sets.