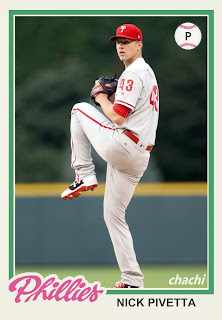 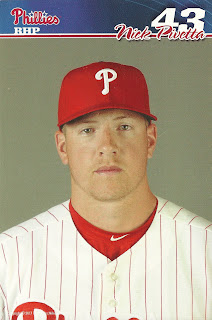 First Mention on The Phillies Room:  July 29, 2015  - All-Time Phillies Saves Leader Papelbon Traded to Nationals - There has been a deal.

The big news throughout the day yesterday was the pending trade of the Phillies all-time saves leader, and general overall nutjob Jonathan Papelbon.  The deal was officially announced before the start of the fifth inning in last night's game and I'm glad the Papelbon era (2012-2015) has officially come to a close.

Papelbon was traded to the Nationals (with cash considerations) for Double-A prospect Nick Pivetta. Pivetta is a lanky right-handed starting pitcher who was drafted by the Nationals in 2013.  Prior to the season, Baseball America ranked him the Nationals 10th best prospect.  He has yet to appear on any mainstream baseball cards although a quick eBay search shows that he has several cards in recent Nationals minor league team sets.

I decided to add Pivetta to the growing Chachi Almost set and hopefully he's appearing on a Chachi base card in the near future.  Given that he's recently appeared in three games for Double-A Harrisburg, I went ahead and assigned him to the Reading Fightin Phils for his card.