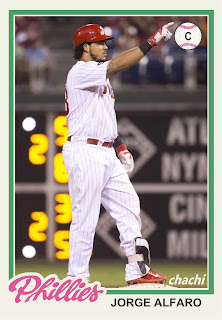 Jorge Alfaro (C - AA) - Alfaro was ranked the third best prospect in the Rangers system in Baseball America's pre-season rankings.  He's going to miss the rest of the 2015 season as he's been out of action since mid-June with a left ankle injury.  It seems as if Alfaro has more baseball cards available than any other player acquired in this deal (with the exception of Harrison) and he's had cards in Topps Heritage Minors, Bowman Chrome and Topps Pro Debut sets since 2012.  Alfaro also has a card in the 2015 Topps Pro Debut set.