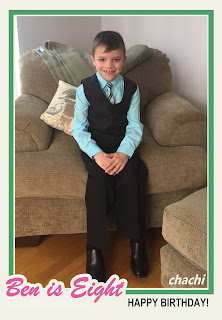 This kid is getting so big, so fast!  Our youngest son Ben turns eight today and he's been reminding me all week that I needed to make him a custom "Ben is Eight" baseball card to go along with the other birthday themed cards I've made for him over the years (see below).  He told me he wanted me to use the picture from the night of his recent first communion.

Ben is kind and happy and he's developing his own independent personality.  He loves swimming, playing tennis, gardening and spending time with his dog, Chewbacca.  He discovered Harry Potter this year and he's asked for the complete run of Harry Potter books as his "big" birthday present.

He's a great kid and I'm so proud of him.  Happy birthday Ben!

Happy birthday Ben! This post reminded me that I’ll need to make a first birthday card next month as well.

Thanks guys! Bru - Looking forward to seeing your custom card too. Time flies!