One Sentence Summary:  A pinch-hit home run from Nick Williams in the eighth inning was the difference in this game, as the Phillies won 6-5.

What It Means:  The offense had only six hits, but they made them count.

What Happened:  Rhys Hoskins (2) hit a two-run home run in the first, and Scott Kingery collected his first Major League home run in the second.  Ben Lively labored through 5 2/3 innings, allowing five runs on nine hits while striking out seven.  Hector Neris pitched a scoreless ninth to earn his first save of the season.

Featured Card:  Williams has voiced his disappointment publicly at not being included in the line-up more regularly but he can take solace in earning the card for this post.  His Topps Opening Day card features a different photo than what was used for his 2018 Topps flagship card.

Field Report:  I sat this one out, but Jenna and Ben attended this game with Jenna's Dad and her brother in celebration of her Dad's birthday.  Yes, they were cold. 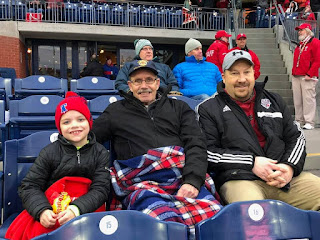