Number of Cards:  42
Card Size:  4" x 6"
Description:  The 2018 set of team-issued photo cards feature a gray, splotchy border with the player's name at the bottom in the middle of a line of blue stars.  Photos are from spring training and it's impressive (to me at least) that the club managed to get Jake Arrieta in the set.  The Phillies script logo along with the player's position and uniform number appear at the top.  Consistent with prior years' designs, the horizontal card backs feature biographical information and complete career statistics.

How Distributed:  The set has been available for sale at Citizens Bank Park since their home opener on April 5th.  Sets can be found for sale at souvenir locations throughout the ballpark.

Complete Standard Checklist:  The cards are unnumbered, but I've presented them below ordered by uniform number.  The set comes in clear packaging with Arrieta and Carlos Santana facing up on either side, and with the cards largely in alphabetical order.

Of the 32 players on the checklist, 25 were on the team's opening day roster, 3 started the season on the disabled list (Eickhoff, Hunter and Leiter Jr.) and 4 started the season in the minors (Arrieta, Eflin, Quinn and Valentin).  As of this writing, the latter three are still in the minors.  Valentin has appeared in the set two years in a row but has yet to play a game for the Phillies.

Once again, the checklist creators did a fantastic job with the only notable omission being reliever

Yacksel Rios who was recalled on the second day of the season when Neshek was disabled.  Both Kingery and Lively had late-spring number changes and their cards reflect their new numbers.

The First Appearance designation is for players who have never before appeared within a Phillies team issued set. These players may have already appeared on other Phillies baseball cards.

For all coaches other thank Kranitz, this marks their first appearances in a Phillies team issued set.  This is also Kapler's first official baseball card as the manager of the club.  The large group of Phillies broadcasters most likely weren't all together in the same place this spring making their inclusion on a photo card difficult.

Rarities:  On June 10, 2018, fellow collector Steve's son participated in a baseball clinic at Citizens Bank Park sponsored by Chevrolet.  Following the session, during which Rhys Hoskins made an appearance, the kids all received a pack of autographed coaches cards.  8 of the 12 coaches cards were identical to those found for sale within the first and second issuance of the photo card sets, but 4 of the cards were unique.  In the style of the first photo card set were cards of bullpen catchers Craig Driver and Bob Stumpo, who made official appearances within the second photo card set. 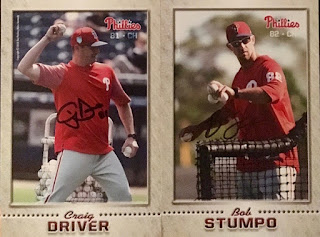 Thank you for the breakdown. As usual, they look great.

I do miss a broadcasters card. It is one of the ways we remember a season or era. I definitely dont need a card of the Phanatic every year.

I'm with you and hopefully there's a second series including a broadcasters card.

And a third series, for that matter!