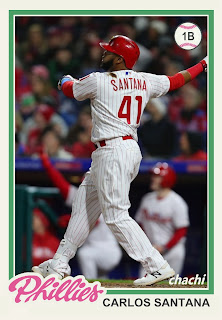 First Mention on The Phillies Room:  December 22, 2017 - On Wednesday afternoon, the Phillies held a press conference to officially introduce their new slugging first baseman, Carlos Santana.  Santana will wear his familiar #41 with the Phillies, the same number he wore for his eight seasons in Cleveland.  He comes to the team on a three-year, $60 million contract which is the Phillies' biggest free agent signing since the Cliff Lee deal ($120, five years) signed in December 2010.

The Phillies like the fact that Santana plays good defense at first base, but they love the fact that he will provide some legitimate power in the middle of their line-up.  And as Jayson Stark Tweeted, only two players have averaged at least 20 home runs and 100 walks over the past five seasons - Joey Votto and Santana.

The signing also brings with it some questions.  Will the Phillies add a big-name starting pitcher to supplement the questions marks in their rotation?  With Rhys Hoskins now moving to left field permanently, will one of Odubel Herrera, Aaron Altherr or Nick Williams be traded?

From a baseball card perspective, and as already pointed out by Phungo, Santana already unofficially has his first Phillies card.  He's featured on Chase Utley's 2014 Topps card, sliding into second.  Santana's first mainstream baseball card appearances (featuring him as a catcher) can be found in a few 2008 Bowman releases.  He made his big league debut in 2010, appearing in most of the 2010 baseball card releases and earning his first Topps flagship card in the 2010 Topps Update set.