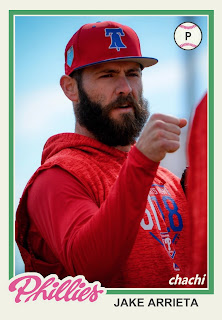 One Sentence Summary:  Jesmuel Valentin hit a walk-off, three-run home run to give the Phillies a 6-3 win over the Rays.

What It Means:  The Phillies are unstoppable.

What Happened:  Thomas Eshelman, most likely headed to the IronPigs to start the season, pitched 4 2/3 scoreless innings.  Maikel Franco had a pair of hits, including a fourth inning solo home run (2).  Rhys Hoskins added an RBI double in the sixth to tie the game at three.

Featured Card:  On Tuesday morning, the Phillies held a press conference to introduce their latest addition, Jake Arrieta.  He then warmed up with his new teammates on the field prior to the game.  The game was secondary.

Camp Head Count:  49 - 1 - 48.  Seranthony Dominguez was optioned to minor league camp, although I would expect we'll see the hard-throwing righty in the majors in the short-term future.

Number Update:  There were a bunch of number swaps necessitated by Arrieta's official arrival and his assuming his #49 from Ben Lively.  Here's the update:


Which still means assistant hitting coach Pedro Guerrero will need a new number, as he had originally been assigned #58.  I may need to send a Phillies Room roving reporter to Clearwater to determine Guerrero's new number.
Posted by Jim at 7:00 AM