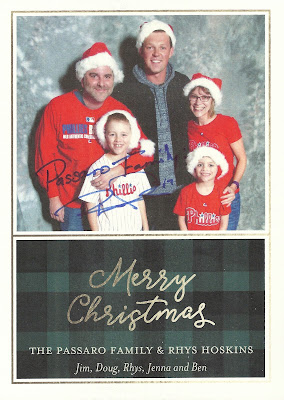 As the Phillies get ready to kick off their 2018 season, I wanted to share a few personal items from my Phillies collection.  In early December, my family enjoyed a day at the Valley Forge baseball card show with the highlights of our day being our photos with Mike Schmidt and Rhys Hoskins.  I summarized our visit in a post here.

What I didn't share in that post was that we came to the show with five Santa hats.  Our goal was to pose for our annual Christmas card picture with Hoskins, as long as he was willing to play along.  Hoskins could not have been more gracious.  We asked him if he'd be willing to wear a Santa hat and as he took the hat from my wife he quickly answered, "Of course!"  We smiled, thanked him and told him we'd send him a copy of the card.  I think he said something like, "Very cool," and then we were on our way.

Our Christmas card turned out great, if I do say so myself.  Our friends and family members seemed to enjoy it although some non-baseball fans who were recipients of the card were thoroughly confused.  Family members who are also Phillies fans thought the card was awesome.  We mailed two copies of the card to Hoskins in care of the Phillies.  I enclosed a small note thanking him again and asked if he wouldn't mind signing one of the cards and returning it to us in the self-addressed stamped envelope also enclosed.  In late January, the card arrived with Hoskins' personalized autograph.  Very cool indeed.

I've had a stack of cards sitting on my computer table since late December that I haven't had time to sort until this past weekend.  Before I put the below cards in my 2017 Phillies binder, I wanted to show them off here.  Doug made these cards for me for Christmas and a lot of time, effort and love went into creating them.  The kid's got talent and apparently so do I based on the stats and season highlights on the backs of each card!  Merry Christmas!

Email ThisBlogThis!Share to TwitterShare to FacebookShare to Pinterest
Labels: Hoskins

Woah that's an incredibly cool family picture. Kudos to Hoskins for signing it too. He must've gotten a ton of fanmail this spring.

Sweet family photo! But I gotta admit... those customs your son drew is way sweeter!

Love the Christmas card, and that he was so willing to play along. But, have to agree, the cards from Doug take the cake!

Those "Chewie" cards are very valuable indeed! (Chachi was our first dog, Chewbacca is dog #2.)