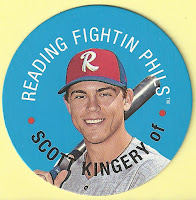 One Sentence Summary:  A dramatic, game-tying home run from Scott Kingery in the ninth wasn't enough to hold off the Yankees.

What It Means:  I know these games don't count, but I would think it's irking new manager Gabe Kapler that the Phils have won only one ballgame so far this spring.

What Happened:  Kingery went 3 for 3, including his solo home run in the ninth inning to tie up the game.  Miguel Andujar hit his second home run of the game in the bottom of the ninth off Ranger Suarez to give the Yankees the walk-off spring win.

Featured Card:  It's going to be fun to watch Kingery develop.  Expected to start the season in Triple-A with the IronPigs, Kingery is viewed as the team's second baseman of the future.  This is 1968 inspired disc card from last year's Topps Heritage Minor League set.  The full name and number of the card is almost as long as this entire post.

Email ThisBlogThis!Share to TwitterShare to FacebookShare to Pinterest
Labels: 1968, 2017, Kingery