What It Means:  Working on Friday afternoon, it was a great feeling to click on Gameday Audio and listen to Scott Franzke and Larry Andersen call this game.

What Happened:  Nick Pivetta started and allowed both Blue Jays runs in his two innings of work.  Mark Leiter, Jr. pitched two shutout innings.  Nick Williams went 2 for 2 with a double, and Danny Ortiz connected for the first home run of the spring for the Phillies.

Featured Card:  This Topps Now card of Williams (with Odubel Herrera) didn't arrive in my collection until after the 2017 season had ended.  It features a photo from right after he had scored on an eighth-inning inside the park home run.  I like the symmetry of this card featuring a highlight from the last game of 2017 and using it to celebrate Williams' two-hit game in the first game of 2018.

The Phillies, along with the other Major League baseball teams, wore the hatsof the Marjory Stoneman Douglas High School Eagles baseball team.  The hats will be auctioned off to benefit the school and the victims' families. 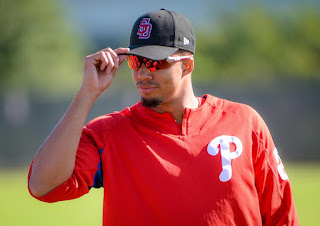 And I'm just going to leave this here:  Moms Demand Action for Gun Sense in America
Posted by Jim at 7:00 AM