Old Phillies Baseball Cards and a Quilt Too! (#SBWTMABCTJ)

She did it again. 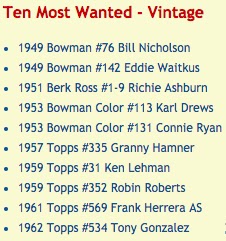 Thanks to my Mom, and a now seven-year tradition, nine of those ten cards have been removed from my want lists and an updated Ten Most Wanted - Vintage list is needed.  On the day after Christmas, we visited my Mom's house so that her grandkids and kids could each open their stockings, unwrap their way too many thoughtful gifts and so that I could once again experience the annual phenomenon now known as Santa Brings Way Too Many Awesome Baseball Cards to Jim (SBWTMABCTJ, for short).

I don't remember a Christmas when I didn't receive one or two or dozens of amazing baseball cards from Santa.  Be it a card I needed to complete my 1975 Topps set (#638 Cubs Team Card) or a pricey card needed for the 1956 Topps set, I've always had the pleasure of adding great cards to my collection every Christmas.  This year was no different.

Presented here in chronological order are the cards I crossed off my list thanks to my Mom.

1949 Bowman #76 Bill Nicholson
1949 Bowman #142 Eddie Waitkus
Appearing in Cubs uniforms, both of these cards are technically Phillies cards.  The backs of both cards list the Phillies as the team designation, as Nicholson was acquired from the Cubs on October 4, 1948, and Waitkus was acquired a few months later on December 14th.  I now need six cards to complete the 1949 Bowman team set, including the rookie cards of Richie Ashburn and Robin Roberts.

1951 Berk Ross #1-9 Richie Ashburn
Speaking of Ashburn . . . This 1951 Berk Ross card came encased in a PSA graded slab but it's now been freed.  No offense to the other cards I received, but this may be my favorite of the lot.

1959 Topps #31 Ken Lehman
1959 Topps #352 Robin Roberts
These are the last two cards I needed to complete the 1959 Topps Phillies team set.  Together in nine-pocket pages, the team set looks incredible and I may need to feature all the cards in a gallery in a future post.

1961 Topps Topps #569 Frank Herrera AS
1962 Topps #534 Tony Gonzalez
Jumping ahead to the 1960s, I'm inching closer to complete Phillies team sets from 1961 and 1962 Topps.  These two high numbered cards have been difficult for me to find, but by Mom was able to track them both down. 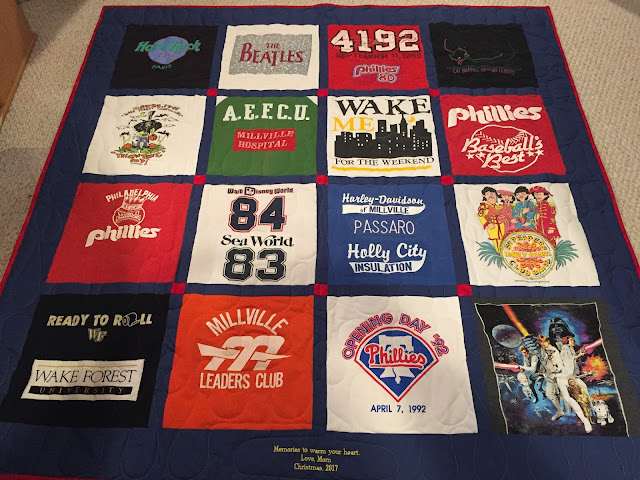 Before ending this post, the post title promised a quilt as part of my annual Christmas summary.  Gathering old t-shirts and baseball uniforms, my Mom had a large quilt made that perfectly captures my formative years.  I hadn't seen some of these shirts in over 30 years, and I had no idea she had kept them.  The resulting quilt is a nostalgic reminder of my youth and a perfect gift.  (My sister got one too, featuring t-shirts from the many local and school plays in which she had appeared.)

If you're interested, and I can highly recommend them, please check out Keepsake Theme Quilts here.
Posted by Jim at 7:00 AM

Great cards, of course. But, i love that quilt!

Awesome cards indeed - those first two are my favorite of the lot, for some strange reason...

That quilt appears to have turned out quite nice. I've always wanted to get one of these done myself, but I have yet to pull the trigger. It would give me something to do with all of the old cross country and track t-shirts I got from races in high school and college.