One Sentence Summary:  The Phillies used two separate three-run innings to overcome the Nationals in this 7-5 victory.

What It Means:  The Phils took the series from the division-winning Nationals, and they'll close out the season with a final weekend series against the Mets at home.

What Happened:  The offense had three big hits in this game - Jorge Alfaro's two-run double in the second, Aaron Altherr's two-run triple in the fifth and then Odubel Herrera's double to bring home Altherr.  Yacksel Rios picked up his first Major League win in relief after starting pitcher Mark Leiter, Jr. failed to complete five innings.  Hector Neris recorded his 26th save.

Field Report/Featured Cards:  The whole family attended this game, as we found ourselves with a rare week night off.  Doug positioned himself at his now-usual spot at the corner of the Phillies dugout, and scored autographs (all repeats) from coaches Larry Bowa, Mickey Morandini and Juan Samuel along with players Ty Kelly and Neris.  Kudos to all those guys for never failing to sign this season for Doug whenever he's asked for an autograph.

Doug also got to "interview" Phillies TV broadcaster Gregg Murphy before the game.  Doug asked Murphy for a picture and Murphy obliged only after asking Doug to hold his microphone.  For that, and for being a genuinely good guy, Murphy earns a Chachi Fan Favorites card along with frequent autograph signer Neris.

As for our youngest son Ben, he hasn't caught the autograph bug like Doug, but he was still very happy with his nachos, crab fries and water ice. 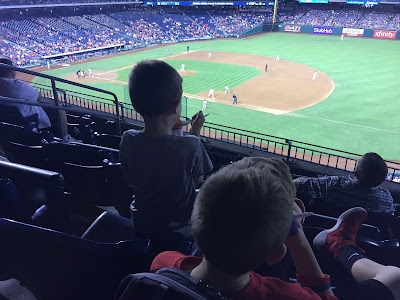 Very nice pictures! I have one of myself from 10 or so year ago where former NFL player and broadcaster Beasley Reece held his microphone like he was interviewing me. That's the first time I saw the situation reversed. Beasley probably was worried I would have run off with the mike!