One Sentence Summary:  Jorge Alfaro, Freddy Galvis and Rhys Hoskins all homered in a seven-run second inning on the way to this 10-0 Phillies victory.

What It Means:  The Phillies completed the three-game sweep of the Marlins and the A's come to town next for a weekend series.

What Happened:  Hoskins is unreal.  He hit his 18th home run in his 34th game, continuing to add to his record breaking achievement.  Cesar Hernandez had a four-hit night and Cameron Perkins hit his first career home run.

Featured Card:  I could easily just post Hoskins cards for each of these recent game summary posts, but I'll show some appreciation for Perkins' first career homer.  The Phillies took the somewhat unusual step of issuing a 14-card photo card update set, released on Tuesday night, and this is Perkins' card from that set.  I'll have a separate post up on the set shortly.

Field Report:  And we were there!  Doug and I had the honor of joining an on-field, pregame ceremony as my company is a corporate sponsor of the annual ALS Phillies Phestival.  It was a fun night and I'm happy to help with this wonderful cause.  Doug had a brief visit with the Phanatic as we were leaving the field, and it was very cool to stand behind home plate for the singing of the National Anthem.  We also met fellow collector Rick in the Hall of Fame club, and it was nice to put a face to the name of the collector who has provided so much input over the past few years to my project of checklisting the Phillies team-issued photo card sets. 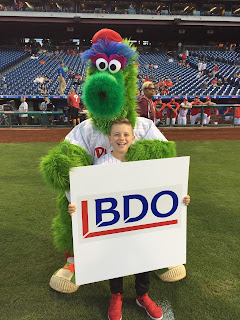