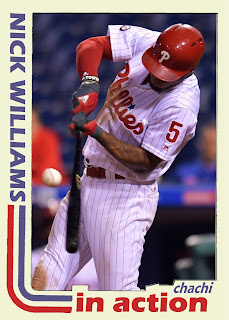 One Sentence Summary:  The Phillies finally won in the 15th on Nick Williams' walk-off double and Rhys Hoskins homered twice more in this 9-8 victory.

What It Means:  There were two on-field celebrations.  The first one happened in the ninth when Hyun Soo Kim singled to right, scoring Nick Williams with the tying run and then (seemingly) scoring Cesar Hernandez with the winning run.  The team celebrated around Kim while the umpires reviewed the call, eventually ruling that Hernandez was out at the plate and sending the game to the 10th inning.

What Happened:  Marcell Ozuna homered in the 10th to give the Marlins the lead again, but Hoskins' second home run of the night (16) in the bottom of the inning tied it up.  It remained tied until Williams doubled Aaron Altherr home with the winning run.

With the exception of Hector Neris allowing Ozuna's home run in the 10th, the Phillies bullpen pitched nine innings of scoreless relief.

Featured Card:  Williams gets added to the rare Chachi In Action insert set for his efforts.

Transactions:  On the off day Monday, the Phillies claimed lefty reliever Zac Curtis off waivers from the Mariners and placed Jesen Therrien on the 60-day disabled list. Therrien is likely headed for elbow surgery.  Curtis appeared in 21 games for the Diamondbacks in 2016 and three games for the Mariners this season.  His baseball card appearances have been limited to minor league team sets, Panini issues and one multi-player card in the 2016 Topps Heritage Minor League set.

Before the game on Tuesday, the Phillies activated Andrew Knapp from the disabled list and selected the contract of pitcher Victor Arano.  Zach Eflin was transferred to the 60-day disabled list.

Phillies Debut:  Arano is the 14th player to make his big league debut this season with the Phillies.