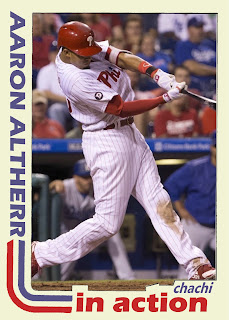 One Sentence Summary:  Aaron Altherr was clutch with a game-tying two-run home run (19) in the seventh and a go-ahead two-run single in the eighth as the Phillies again stunned the reeling Dodgers, 7-5.

What It Means:  The Phils go for the improbable four-game sweep Thursday afternoon.

What Happened:  Tommy Joseph contributed an RBI-double in the second and a solo home run (22) in the seventh.  The recently dependable bullpen was shaky, but Hector Neris pitched a perfect ninth to record his 23rd save.  Odubel Herrera made an impressive leaping catch at the wall to end the game.

Featured Card:  The lack of Altherr baseball cards is incredible to me, so I'm taking matters into my own hands.  Altherr joins the Chachi In Action insert set with this card.

Field Report:  I was at this game for work reasons, but I'm still counting it in my official season tally. With a little more than a week remaining in the season, I've attended 16 games and my personal record is an even 8-8.  I'll need to get to at least one more game to tip the balance to the win column.
Posted by Jim at 1:00 PM