One Sentence Summary:  After a lengthy rain delay, Jorge Alfaro homered in the sixth to break a 2-2 tie and ultimately send the Phillies to victory.

What It Means:  The prospects continue to perform, and the Phillies are fun to watch again.

What Happened:  The rain delay ended Ben Lively's night early, but the Phillies bullpen combined to throw six scoreless innings.  Victor Arano threw two of those scoreless innings, picking up his first big league win.  J.P. Crawford tied the game in the fourth with an RBI single and he added a sacrifice fly in the eighth.

Featured Card:  It seems as if I have more cards of Alfaro in my 2017 Phillies binder than any other player.  Here's the one autographed card I have of his in that binder, from the Bowman release.

Field Report:  We were there!  We enjoyed the pre-rain delay portion of the game from Section 123 before the steady rain forced us to seek shelter under cover in Section 122.  We didn't see much action while we were still there, but our sons surprisingly seemed to enjoy themselves during the one hour and 46-minute rain delay. 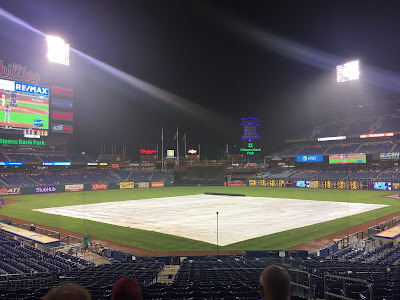 Email ThisBlogThis!Share to TwitterShare to FacebookShare to Pinterest
Labels: 2017, Alfaro

It's not your imagination.....whenever i look at a new checklist, I start chanting....Alfaro and Thompson and Quinn, oh my.

Yes! Topps went all in on that trio this year. It's been hard explaining to my 10-year-old son why he has 15 different Roman Quinn cards, but only a few cards of Freddy Galvis this year.

I'm already planning ahead for the avalanche of Hoskins cards coming in 2018. Topps will do everything it can to have him included in every possible set and insert set.