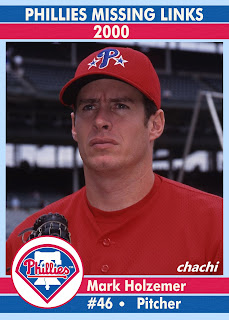 Even with fellow left-handed reliever Bryan Ward already in the Phillies bullpen, the team decided to add another lefty to the mix when they recalled Mark Holzemer from Triple-A to take the place of the demoted Paul Byrd.  Signed by the Phillies as a minor league free agent in November 1999, Holzemer had previously seen big league time with the Angels, Mariners and Athletics.  He appeared in 15 games with the Phillies before a strained left hamstring landed him on the disabled list.  After returning from the injury, Holzemer appeared in 10 more games for the Phillies before being designated for assignment on August 15th.  He'd clear waivers and report to the Red Barons where he'd finish out the 2000 season.

Holzemer pitched in 6 games in Japan in 2001, and then spent the 2002 season with the Diamondbacks' Triple-A team in Tucson before retiring.

Phillies Career
25 games - all in relief, 0-1, 7.71 ERA, 25 2/3 innings, 19 strikeouts, 8 walks
Acquired:  Signed as a minor league free agent formerly with the Colorado Rockies organization, November 15, 1999.
Debut:  June 4, 2000 - Relieved Curt Schilling in the eighth inning in a game against the Red Sox, striking out the only batter he'd face, Scott Hatteberg.
Final Game:  August 13, 2000 - In an eventual 14-7 blow-out loss against the Astros, pitched the final two innings, allowing two runs on four hits.
Departed:  Left the Phillies organization following the 2000 season, and signed with the Yokohama Bay Stars in Japan.