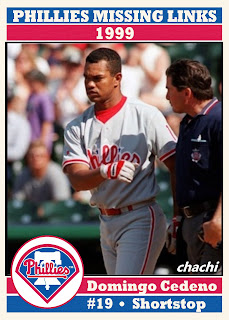 In the middle of the 1999 season, with regular shortstop Desi Relaford lost for a few months due to a right wrist injury, the Phillies needed someone to occasionally spell the new starting shortstop, veteran Alex Arias.  Domingo Cedeno was acquired from the Mariners on July 7th to fill that role, and he stuck around until Relaford came off the disabled list on September 13th.

Phillies Career
32 games, .152 (10 for 66), 1 home run, 5 RBIs
Acquired:  Acquired from the Seattle Mariners for Jose Flores, July 7, 1999.
Debut:  July 10, 1999 - Pinch-hit for Paul Byrd in the fifth inning on an eventual 8-4 loss to the Orioles, singling off Mike Mussina and scoring Marlon Anderson.  Cedeno would ultimately score on a Rob Ducey three-run home run.
Final Game:  September 10, 1999 - In Phoenix, struck out swinging against Randy Johnson while pinch-hitting for Scott Aldred.
Departed:  Released, September 13, 1999, and signed as a free agent with the New York Mets, January 5, 2000.