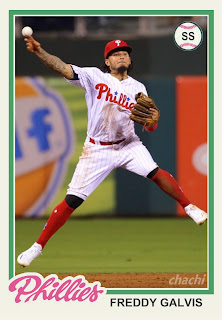 On Friday afternoon, Topps released its first images of its 2018 flagship set.  The design features a borderless, un-manipulated photo, name and team bars that begin to disintegrate into individual pixels and a team logo riding down a water slide.  I'm indifferent to the design, and I'll collect the Phillies cards in the set no matter what the flagship set looks like.  My 10-year-old son Doug, when first shown the design, shrugged his shoulders and said, "I wish they'd do something that looks like the older Topps cards."  So there you have it.

(As an aside, he's been playing around a lot on the Rookies App, which leans heavily on retro-style baseball card designs.  His favorite creations look like 1983 Fleer cards.)

As I've done for the past several years, whenever Topps reveals its design for the next year's flagship set, I also unveil my design for the next year's Chachi set.  I've been toying with the idea of using the 1978 Topps design for as long as I've been creating these custom Phillies sets, but I've never pulled the trigger since the cursive font used for the team name can't be easily reproduced.  As the fine folks at The Shlabotnik Report covered a few years ago, Topps gave us a gift with custom 1978 Topps-style wordmarks for the Rockies, Nationals, Rays, Rockies and Diamondbacks.  I'll be using these wordmarks for my custom 2018 Chachi cards, with some portion of my immense annual profits going towards The Shlabotnik Report as a finder's fee.

That still leaves me with the dilemma of what to do for the Marlins, or any minor league cards I create, or the cards I create for my kids' sports teams.  For those cards, I'll break down and use the Brush Script Italic font, which is the closest custom card creators have come to the unique 1978 Topps team name font.