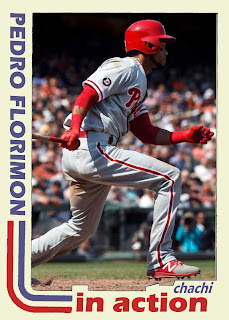 One Sentence Summary:  Pedro Florimon was the unexpected hero in this 5-2 win over the Giants.

What It Means:  After a 2-5 road trip out West, the Phillies head back home where they'll start a four-game series against the Marlins with a double header on Tuesday.

What Happened:  Florimon had three RBIs, including a two-run single in the eighth that broke a 2-2 tie.  He also threw out a runner at the plate and made a nice diving catch during the game.  Before Florimon's big hit in the eighth, Jorge Alfaro had tied up the game with a single to score Rhys Hoskins.  Hoskins added a solo home run (5) in the ninth.

Ben Lively pitched well in his return to the Majors, allowing two runs over six innings.  Hector Neris recorded the final four outs of the game to record his 15th save.

Featured Card:  P. Flo* gets the In Action treatment for his big game.  Florimon is in the IronPigs team set, but it's doubtful he'll ever receive an official Phillies baseball card.  If there is a second series, team-issued photo card set released, I would be stunned (albeit pleasantly stunned) if he makes the set.

*This is not actually his nickname, but it makes us giggle when I say it out loud.

Transaction:  Lively was recalled from the IronPigs, taking the injured Odubel Herrera's spot on the active roster.
Posted by Jim at 12:00 PM