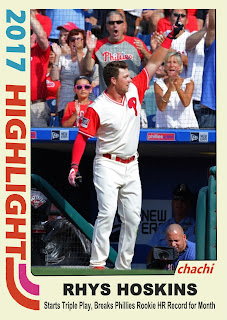 One Sentence Summary:  Nick Williams broke a 3-3 tie with a two-run home run in the bottom of the fifth, while Rhys Hoskins started a triple play in the top of the inning and later hit his 11th home run of the season.

What It Means:  This Hoskins guy is pretty exciting.

What Happened:  With the Cubs up 3-0 and threatening in the fifth, Hoskins started a triple play when he made a shoestring catch.  He threw to Cesar Hernandez at second who stepped on the bag for the second out and Hernandez threw to Tommy Joseph at first to record the third out.  In the bottom of the inning, Freddy Galvis tied the game with a two-run single and Williams followed that up with his 8th home run of the season.

Featured Card:  For the second time this weekend, Hoskins earned a 2017 Chachi Highlight card (aka Chachi Now) for his feats on the field.  The triple play was already impressive enough, but his home run in the eighth off Koji Uehara broke the Phillies rookie home run record for a month set by Ryan Howard in September 2005.

He also became the fifth player in Phillies franchise history to hit a home run in five consecutive games, joining Chase Utley (who did it twice), Bobby Abreu, Mike Schmidt and Dick Allen.

Transaction:  Nick Pivetta was recalled to make the start and reliever Drew Anderson was sent back down to Triple-A.
Posted by Jim at 7:00 AM