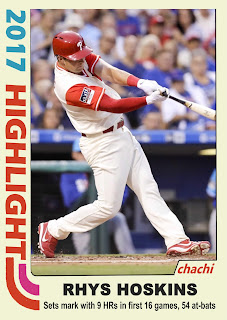 What It Means:  This was the first game in the three-game Players' Weekend series against the Cubs. Both teams (along with the other 28 Major League teams) wore youth baseball-inspired jerseys featuring bright colors, secondary or new logos on the hats and nicknames on the backs.  Given the chaos and confusion in our country these days, it's hard for me to get too worked up about these uniforms and my initial reaction has been - sure, why not?

Featured Card:  Hoskins earns the rare 2017 Chachi Highlight card for hitting his 9th home run in just 54 at-bats, becoming the quickest player since 1900 to have that many home runs in that few at-bats.  He's also the first player since at least 1913 to have nine home runs in his first 16 games.

Transaction:  After his start on Thursday, Jake Thompson was sent down to the IronPigs and Daniel Nava was activated from the disabled list.
Posted by Jim at 3:00 PM