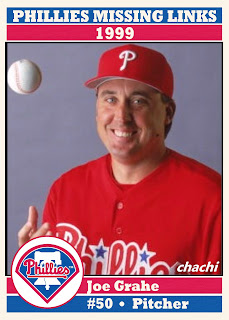 A workhorse reliever for the Angels in the early 1990s, Joe Grahe pitched 17 games for the Rockies in 1995 and then would spend the next three seasons trying to get back to the majors.  Between 1992 and 1994, Grahe appeared in at least 40 games with the Angels, notching a career high 21 saves in 1992.

Signed by the Phillies in February 1999, Grahe began the season with Double-A Reading before his 0.90 ERA in his first seven games earned him a promotion to Triple-A Scranton/Wilkes-Barre.  He pitched well for the Red Barons and when the Phillies shook up their bullpen in early July, Grahe got the call along with Steve Schrenk.  (Mike Grace was sent down and Yorkis Perez landed on the disabled list.)  Grahe appeared in five games in his first stint with the Phils, not allowing a run in four innings pitched.  After a brief demotion, Grahe was again recalled in late August, sticking around through the end of the season and used sparingly as a fifth starter and occasional reliever.

Grahe became a free agent following the 1999 season, but he'd resign with the Phillies.  He'd appear in just six minor league games in 2000 before his playing career came to an end.

Phillies Career
13 games, 5 starts, 1-4, 3.86 ERA, 32 2/3 innings, 16 strikeouts, 17 walks
Acquired:  Signed as a free agent formerly with the New York Yankees organization, February 2, 1999.
Debut:  July 3, 1999 - Pitched 2 shutout innings in a 21-8 blowout win against the Cubs, relieving Paul Byrd.  Struck out three and walked three.
Final Game:  October 1, 1999 - Started against the Expos and was chased after 1/3 inning having allowed five runs on six hits and a walk.
Departed:  Departed the Phillies organization at some point during or after the 2000 season.