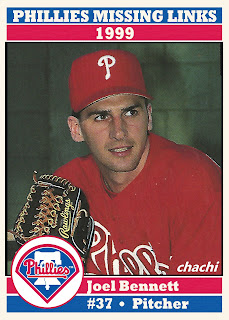 Released by the Orioles on July 27, 1998, Joel Bennett signed a minor league deal with the Phillies a few days later and spent the remainder of the season with the Scranton/Wilkes-Barre Red Barons. Bennett had started the 1998 season going 10-0 for the Rochester Red Wings, and he was named the starting pitcher for the International League in the Triple-A All-Star Game.  The Orioles soon called him up, but he would opt for free agency a week later when the Orioles tried to send him back down to Rochester.

The Phillies invited him to spring training in 1999 as a non-roster invitee and he got the call to the majors on May 7th when Paul Spoljaric was traded to the Blue Jays.  He'd start three games for the Phillies, struggling in each appearance before moving to the bullpen for a pair of games.  His roster spot was needed when the Phillies claimed Amaury Telemaco off waivers from the Diamondbacks, and Bennett was sent back to the minors on June 9th.  His big league career with the Phillies lasted a few days more than a month.

Bennett pitched in the Red Sox system in 2000 before latching on with the independent New Jersey Jackals.  He'd pitch in parts of seven seasons with the Jackals between 2001 and 2007, compiling a record of 59-19 in 104 games.

Phillies Career
5 games, 2-1, 9.00 ERA (17 earned runs in 17 innings pitched), 13 strikeouts
Acquired:  Signed as a free agent formerly with the Baltimore Orioles, July 30, 1998.
Debut:  May 8, 1999 - Started and earned the win against the Rockies in Denver, allowing two solo home runs to Dante Bichette and Todd Helton over five innings of work.
Final Game:  June 6, 1999 - Relieved Robert Person in the sixth inning, allowing two runs on five hits over 1 2/3 innings and ultimately earning the win when the Phillies came from behind to win.
Departed:  Granted free agency, October 6, 1999, and signed with the Boston Red Sox organization that offseason.