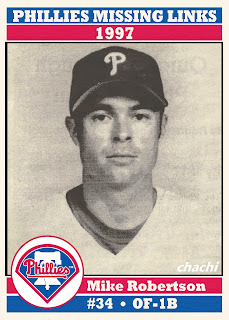 In an under-the-radar offseason trade, the Phillies sent the homegrown Gene Schall to the White Sox for Mike Robertson on January 31, 1997.  Schall was a year older than Robertson and the recent acquisition of Rico Brogna from the Mets meant that he'd be without a position with the big club in 1997.  Robertson was also primarily a first baseman, but he had seen some time in the outfield while moving up through the White Sox system.  In 1996, he attained career highs in home runs (21) and RBIs (74) while hitting .258 for the Nashville Sounds.

Robertson started the 1997 season with the Triple-A Red Barons, appearing in 121 games and tallying impressive numbers - .298, 12 home runs, 72 RBIs.  Terry Francona's team was mired in last place when Gregg Jefferies injured his hamstring in mid-August and Robertson got the call on August 24th.  He'd appear in 22 games through the end of the season, hitting .211 (8 for 38) with two doubles and four RBIs.  Following the season, despite his decent numbers in the minors, Robertson was let go and he'd eventually sign with the Diamondbacks.

In 1998, he appeared in 11 games with the Diamondbacks and then bounced from the Pirates to the Astros to the Braves organizations between 1999 and 2001 before retiring.