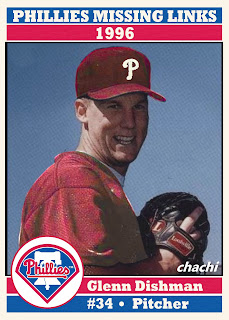 On September 12, 1996, with 15 games remaining in the season and the Phillies 28 games behind the Braves, the last place club selected pitcher Glenn Dishman off waivers from the Padres.  I knew very little about Dishman, but I assumed at the time the Phillies had future plans for the 25-year-old lefty. Why else would they add him to the organization with the team going nowhere and so close to the end of the season?  This reasoning probably explains why I added eight 1996 baseball cards of Dishman's to my Phillies collection following the season, having completely missed the news that he had already been claimed off waivers by the Tigers that October 3rd.

Dishman's Phillies career consisted of four games - one start and three relief appearances.  His lone start came in the final game of the 1996 season and he lasted four innings in a game the Phillies would come from behind to win against the Mets.  Dishman appeared in seven games for the 1997 Tigers and spent the next five years pitching in the Brewers' organization, for the independent Sonoma County Crushers, and in the Mexican League before retiring following the 2002 season.