Bobby D. and Me 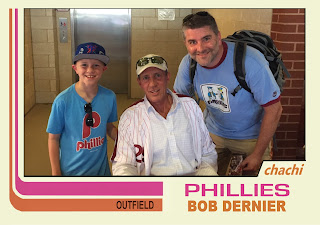 One Sentence Summary:  Hector Neris couldn't keep the Padres off on the board in the ninth and . . . WHO CARES ABOUT THE GAME, I MET BOB DERNIER.

What It Means:  The Phils have lost four in a row.

What Happened:  A strong outing from Nick Pivetta (7 innings, 3 runs, 9 strikeouts) was wasted as the offense went 1 for 8 with runners in scoring position.  Neris allowed the eventual winning run to score in the ninth on an Austin Hedges sacrifice fly.  Hedges had previously homered twice in the game. 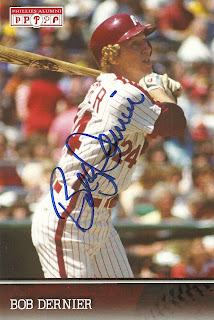 Tommy Joseph hit his 15th home run, a solo shot, in the fourth. The game was interrupted in the seventh by a violent rain storm, resulting in a 90-minute rain delay.  A truly amazing fireworks displayed followed the disappointing ending to the game.

Featured Card/Field Report:  Doug and I attended this game and we were looking forward to the '80s Retro Night. Chewbacca and R2-D2 greeted us when we entered the ballpark, and the Phillies promotional team did a great job of maintaining the '80s theme throughout the night.  Pre-game, as has become his ritual, Doug stationed himself by the Phillies dugout and received autographs from Joseph, Andres Blanco and Phillies TV announcer Gregg Murphy.

But the big event was getting to meet Bob Dernier for the second time in my life.  I still haven't fully told the story of the first time I met Dernier, but it involves me playing catch with him in the outfield of Veterans Stadium during the summer of 1982.  He immediately became my favorite player, and I was devastated when Dernier was traded to the Cubs in 1984.  Walking around pre-game, Doug spied Dernier signing autographs in the concourse and I made a bee-line straight to his table.

We were the last two in line.  I told Dernier he was my all-time favorite player, he had played catch with me in 1982, I had written to him every year between 1982 and the end of his career and he had usually written back and that I couldn't believe I was meeting him again.  I babbled.  I stared uncomfortably.  Doug asked at one point if I was all right.

Dernier asked Doug if he was my son and who was his favorite player.  Doug replied Joseph was his current favorite player to which Dernier replied, "That's a great choice."  We asked for a photo and he graciously complied before being whisked away for a radio interview.  Soon afterwards, I watched as he threw out the first pitch to Larry Bowa.  Dernier shared hugs and lengthy conversations with both Bowa and Juan Samuel and I don't think I've stopped smiling yet.

I will always remember the thrill of watching his inside-the-park homerun.

Great story--I'm glad you got to meet him as an adult! Did you mention The Phillies Room to him?

I'm reminded of a story in the NY Times of a record store called Rebel Rebel in Greenwich Village that shut down a couple years ago. David Bowie filmed a movie nearby and the director told him there was a store called Rebel Rebel nearby and that the owner was his biggest fan. He said, "He would have a heart attack if you actually walked into the store." And Bowie replied, "I know it's there. And that is exactly why I could never go there."

Anyway, cool story of meeting Bobby D! My son and I went today with one of his friends. We enjoyed the Schmidt bobbleheads, and talking to Greg Luzinski for the maybe 20th time and the great effort by Aaron Nola. Once he gave up the lead in the 7th, we knew the game was over though.

I didn't mention the Phillies Room to him, but I really should have. It all happened so quickly I didn't have time to compose my thoughts. I'm pretty sure he thought I was half nuts!

If not for Doug noticing him, I would have obliviously walked right by.