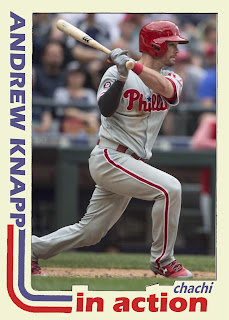 One Sentence Summary:  The unlikely duo of Ricardo Pinto and Andrew Knapp helped lock in the 5-4 win for the Phillies as they swept the quick two-game series in Seattle.

What It Means:  Carlos Ruiz, hitting .194 as of this writing, did not appear in the series for the Mariners.

What Happened:  The Phillies mounted an impressive ninth inning comeback, started with a Tommy Joseph (13) solo home run.  With the score tied and two outs recorded, Cam Perkins walked, went to second on a balk and was singled home by Knapp.  Knapp had scored in the third when Ty Kelly hit his first home run of the year.

The comeback was made possible due to three scoreless innings from Pinto, who picked up his first big league win.

Featured Card:  Knapp gets the In Action treatment for his game-winning hit.
Posted by Jim at 3:30 PM