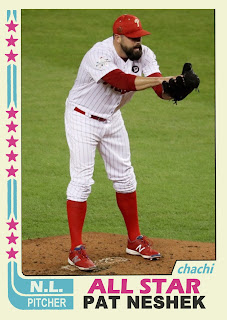 One Sentence Summary:  Robinson Cano homered in the top of the 10th inning off Wade Davis to break a 1-1 tie and send the American League to the eventual win in Miami.

What It Means:  Don't get me wrong, I still love the All-Star Game, but the boring game coupled with Fox's ridiculous in-game stunts left me a little jaded.  Alex Rodriguez patrolled the infield before an inning, interviewing All-Stars attempting to warm up.  Players were mic'd up and interviewed in the field during live at-bats.  I wanted to watch a baseball game.

But the thing that really upset me this year is that I completely missed the pre-game team introductions.  This has always been my favorite part of the game, and it traditionally starts no sooner than 8pm.  Switching over to Fox right at 8pm, the teams were already on the field and the National Anthem was about to begin.  I completely missed all introductions.  Bummed.

What Happened:  The low-scoring affair highlighted the top pitching talent from both leagues.  The A.L. scored first on a Miguel Sano RBI single in the fifth.  Yadier Molina homered in the sixth to tie it up and Cano broke the tie in the 10th with his blast.

Featured Card:  Once again, the Phillies had only one All-Star, sending reliever Pat Neshek to the game.  Neshek entered in the second inning after starting pitching Max Scherzer threw just one frame.  He allowed a hit to Justin Smoak in between retiring Carlos Correa, Corey Dickerson and Salvador Perez.

I worked on the office until 11 (a rare event) and then at home until 2. Ugh. I had set the timer to record the game plus an extra 90 minutes. I only remembered to check whether there even was a pregame show at 7:45 and used my FioS app to record it from that point. So I may have the intros but not sure. (They are also my favorite part!). When I got home I backed up the TV about 60 minutes and watched it while working. This was the least I watched of the ASG since 1976, which was a year before I started watching. Boo work!

The good news is my son has no idea what happened in the game and so in the next couple weeks we will probably sit and watch it as if live. We did watch the HR Derby together. That was a blast!

Yeah, the days of me hanging on each and every at-bat are long gone until maybe more Phillies start to pop up again in the game.