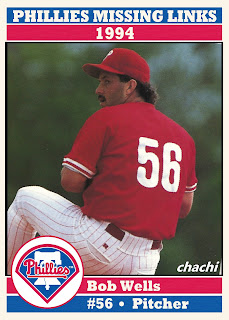 Signed by the Phillies as an amateur free agent in August 1988, Bob Wells spent five seasons toiling in the minors before getting the call to the big leagues in May 1994.  John Kruk went on the disabled list on May 12th and Wells was recalled as the Phillies were in need of a bullpen arm.  He lasted the month with the club before being sent down in part to make room for the newly acquired Paul Quantrill on the club's roster.  Wells was waived a month later to free up a spot on the 40-man roster for Fernando Valenzuela, and the Mariners picked him up.