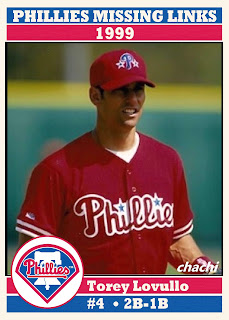 Currently in his first year as a major league manager for the Diamondbacks, Torey Lovullo's eight-year major league playing career came to a close with 17 uneventful games with the 1999 Phillies. An early September call-up along with Mike Grace and Cliff Politte, Lovullo had enjoyed a solid season with the Scranton/Wilkes-Barre Red Barons, hitting .279 over 139 games.  Starting five games at second base and twice at first base for the Phillies, he hit .211 (8 for 38) with a pair of home runs and five RBIs.

Lovullo departed as a free agent following the season and played 29 games in 2000 with the Yakult Swallows in Japan before calling it a career.  He began his coaching career in 2001 with Cleveland as a minor league infield coach.  In the majors, he has served as the first base coach for the Blue Jays (2011-2012) and as the bench coach for the Red Sox (2013-2016).  Lovullo filled in as the interim manager for the Red Sox over the final seven weeks of the 2015 season when John Farrell was undergoing treatment for lymphoma.  His 2017 Diamondbacks are currently one of the best teams in the National League.