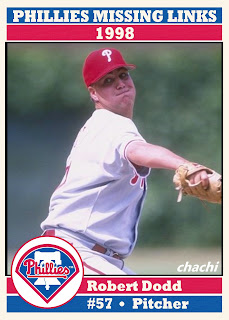 In need of another left-handed reliever after Yorkis Perez was placed on the disabled list, the Phillies recalled Robert Dodd from the Scranton/Wilkes-Barre Red Barons on May 27, 1998.  He'd make his major league debut a day later with a scoreless inning against the Cubs at Wrigley Field.  Pitching only three more times before being demoted back to Scranton, Dodd got his first and only big league win on June 16th when he pitched a scoreless ninth inning against the Pirates in a game the Phillies were trailing, 7-1.  The Phillies would miraculously score seven times in the bottom of the inning, capped by a walk-off, three-run home run from Mike Lieberthal.  Dodd was sent back down the following day when Perez was activated off the DL.

Dodd pitched two more full seasons in Reading and Scranton in 1999 and 2000, never getting the return call to the majors.  He wrapped up his professional career pitching three seasons (2001-2003) with the independent Somerset Patriots.

Phillies Career
4 games, 1-0, 7.20 ERA, 5 innings pitched, 4 strikeouts
Acquired:  Via draft
Debut:  May 28, 1998 - Relieved Curt Schilling in the sixth inning of a game against the Cubs, allowing no runs and striking out Brant Brown.
Final Game:  June 16, 1998
Departed:  Departed the organization following the 2000 season and signed with the Somerset Patriots of the independent Atlantic League.