One Sentence Summary:  The Phillies lost a tough one to the Diamondbacks on Father's Day, falling in the late innings as Hector Neris and Jeanmar Gomez couldn't get the job done.

What It Means:  Yet another series sweep drops the Phillies further into the cellar in the division. Following an off day on Monday, the team opens a three-game set with the Cardinals.

What Happened:  Ben Lively bounced back from a three-run first inning to pitch six strong.  Ty Kelly hit a clutch, pinch triple in the sixth to drive home the go-ahead run.  Neris blew the save in the ninth and Gomez allowed a home run to Rey Fuentes in the 10th.

Featured Card:  The Phillies Collector Tweeted out this card earlier today, and I too thought it would be a perfect card to feature in this post.

Field Report:  And we were there!  Our church organized a trip to the game, which included a pre-game tail-gate with a ton of fantastic food.  Our seats in Section 243 were HOT, but the occasional rain shower cooled us off.  Most importantly, we had a great time with our church family and I spent some quality time at the ballpark with my two sons.  Happy Father's Day to all of you Dads out there! 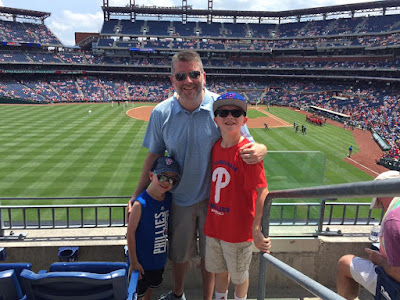