One Sentence Summary:  Ben Lively was extremely impressive in his big league debut and a big three-run triple from Odubel Herrera (with accompanying bat flip) led the Phillies to a rare win.

What It Means:  This was the first Phillies win since the prior Saturday, a game we also attended.

What Happened:  Lively allowed a run on four hits over seven innings with nary a strikeout. Tommy Joseph tied the game at one with a solo home run (9) in the sixth.  Herrera came up with the bases loaded in the seventh against Hunter Strickland and cleared them off with a double to center.

Hector Neris made it interesting in the ninth allowing two Giants runs, but Jeanmar Gomez closed it out with one pitch by inducing a game-ending force out.

Featured Card:  Lively's regular issue Chachi card features a still shot of him, so I thought it appropriate to give him an In Action card to celebrate his debut. 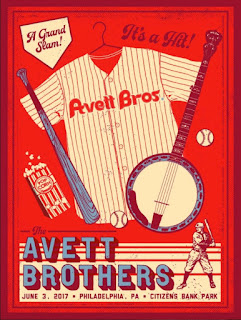 Field Report:  Jenna and I enjoyed the first few innings of this game from Harry the K's, and then we made our way to Section 116 to watch the tail-end of Lively's outing along with the eventual post-game Gatorade bath he received.

After the game, we enjoyed a fantastic performance from The Avett Brothers, andthe setlist for the mini-concert is below.  It was the first time we had seen the band live, and I wouldn't mind catching another of their shows whenever they're back in town. 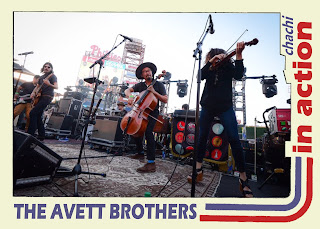 Transactions:  The Phillies optioned Mark Leiter, Jr. to the IronPigs to make room for Lively on the roster.  Joaquin Benoit was placed on the disabled list with a left knee sprain and Adam Morgan was brought up from Lehigh Valley (again) to take his place.

Phillies Debuts:  Lively became the 13th player to make his Phillies debut in 2017 and the 6th to make his major league debut.

Did you get as close to the stage as that photo makes it seem? I'd like to see the Avetts live... I've seen concerts on TV, it looks like they really get into it. Sadly, for me, some of that spark gets lost in the studio, because I've never really gotten into any of their albums (but my wife likes them).

Has your Ben latched on to Ben Lively yet, or is it too soon?

Nope, that's a photo from the Phillies Twitter account. I was impressed by them, and I had only ever really heard the songs played on the radio here locally. I may need to check out some of their albums, or at least some more of their live stuff.

We're easing our Ben into Ben Lively fandom. He's still following the other Ben - Ben Revere - and he's requested an Angels shirt to continue to support him.