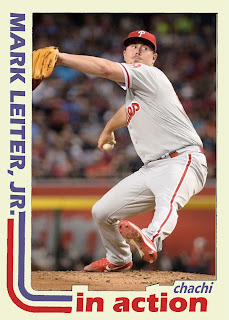 One Sentence Summary:  In his first major league start, Mark Leiter, Jr. pitched six scoreless innings and helped the Phillies to a 6-1 victory.

What It Means:  The Phillies have a two-game winning streak!

What Happened:  The game was a lot closer than the final score indicates, as the Phillies held a narrow 1-0 lead heading into the eighth inning.  Maikel Franco (9) hit a solo home run to give the Phillies a little cushion and then the offense added four more runs in the ninth.  The big hit was Tommy Joseph's (12) two-run home run (into the pool at Chase Field) to give the Phillies a 6-1 lead.

Featured Card:  Leiter earns an In Action card for his efforts.  He allowed just three hits while striking out five.

Transaction:  To make room for Leiter on the roster, reliever Casey Fien was placed on the 10-day disabled list.
Posted by Jim at 9:00 PM