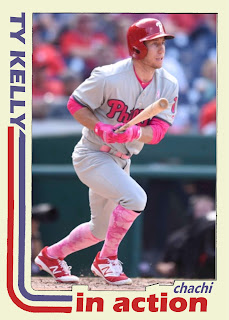 One Sentence Summary:  The Phils battled back with three ninth inning runs, capped by Ty Kelly's big single, to beat the Nationals, 4-3.

What It Means:  After losing 11 of their last 13, hopefully this is the start of a good stretch for the Phillies.

What Happened:  The bullpen trio of Joely Rodriguez, Joaquin Benoit and Hector Neris held the Nationals scoreless for four innings after Jeremy Hellickson departed.  Down 3-0, Tommy Joseph got the Phillies on the board with his solo home run (5) in the seventh.  Aaron Altherr homered (8) to start the ninth.  Maikel Franco and Cameron Rupp added back-to-back doubles.  With Andrew Knapp running for Rupp, Freddy Galvis walked and Kelly came up with his big, game-winning hit.

Featured Card:  Kelly earns an official Chachi In Action card for his efforts, which shows off the pink accented uniforms worn this Mother's Day weekend.

Transaction:  The Phillies added Ben Lively to the active roster to serve as the 26th man given the double header on Sunday.
Posted by Jim at 7:00 AM