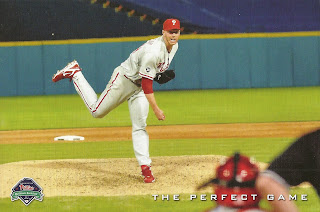 One Sentence Summary:  Edinson Volquez and four Marlins relievers held the Phillies to a run on four hits in this series-opening loss.

What It Means:  I remember when I first started these game summary posts, back when the Phillies were winning more often than not, and I couldn't wait to recap each game.  That's not the case anymore.  These games are hard to watch and harder to re-live following each loss.

What Happened:  Jeremy Hellickson pitched six innings, giving up four runs on six hits.  Cesar Hernandez doubled and Howie Kendrick had a hit in four at-bats in his return to the line-up.

Featured Card:  Seven years ago on May 29, 2010, Roy Halladay pitched his perfect game against the Marlins in Miami.  I believe I have three cards in my collection specifically paying tribute to Halladay's feat, and the card featured here is my favorite of the three:


Transaction:  Kendrick was activated from the disabled list, taking the demoted Zach Eflin's spot on the active roster.
Posted by Jim at 8:30 PM

Email ThisBlogThis!Share to TwitterShare to FacebookShare to Pinterest
Labels: 2010, Halladay