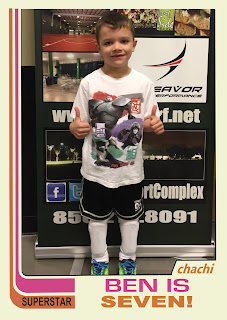 I find it hard to believe that Ben, our youngest son, turns seven today.  It's absolutely true what everyone says in that seven years went by in the blink of an eye.

Ben loves his dog Chewbacca and he loves dogs (especially puppies) in general.  He loves to play soccer and tennis and he loves to swim.  He likes school and his friends.  He likes to write little stories and he recently found enjoyment with building Legos.  He likes to garden - both flowers and vegetables, and he likes to play outside.  Ben has shown an incredible interest in traveling and seeing as many different places as possible.  He likes telling people where he's been and where he'd like to go next.

He's a great kid with a big heart and I'm prouder of him every day.  Happy birthday Ben!

Happy Birthday, Ben! I hope the Phillies win for you tonight!

You're closing in on a complete binder page!