One Sentence Summary:  A miraculous comeback against the Nationals fell short as the Phillies dropped their 2017 home opener, 7-6.

What It Means:  The offense hasn't been great, but at least the Phillies showed some life in the later innings of this game.  Maikel Franco and Tommy Joseph are a combined 2 for 29 (.069) with ten strikeouts and no RBIs so far this season.  (H/T Phuture Phillies on Twitter.)

What Happened:  Vince Velasquez was chased after four innings having allowed four runs on five hits, but still impressively striking out 10.  Joely Rodriguez surrendered a three-run home run to Jayson Werth in the fifth.

Down 7-0 entering the sixth, the Phils chipped away at the lead.  Freddy Galvis had an RBI double in the seventh and came home on Aaron Altherr's first home run of the year.  Galvis later added a two-run home run (2) in the ninth.

Field Report:  We were there!  We were very cold, a little bored and occasionally wet, but we were there.  Doug impressed with the consumption of two Wayback cheeseburgers and a popcorn while Ben stuck to a soft pretzel and a hot dog.  The knit hats given away to all fans definitely came in handy as well.  We picked up our annual editions of the Phillies photo card team sets, as well as the Topps Phillies retail team sets.  I'll run a post on the photo card set soon.

The Phillies are still using the 2016 Topps design for their giant line-up cards, which means Howie Kendrick and Michael Saunders now have Phillies cards with that design.

Featured Card:  This is Galvis' card from the 2017 Topps Phillies retail team set, now available for sale at the ballpark. 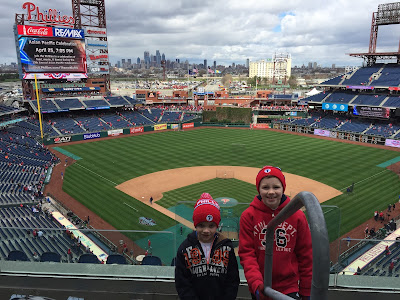 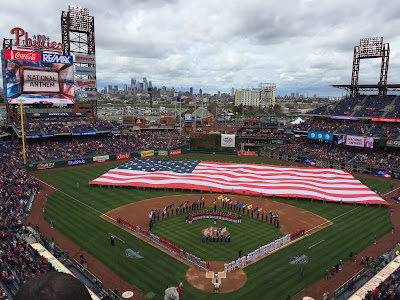 Email ThisBlogThis!Share to TwitterShare to FacebookShare to Pinterest
Labels: 2017, Galvis

I was there too. I hope you guys stayed for the end! It looked like about 3/4 of the park had left by the time the Phils started scoring.

We left right after Brock Stassi batted in the bottom of the 7th . . . and then of course the Phillies started making thing interesting.