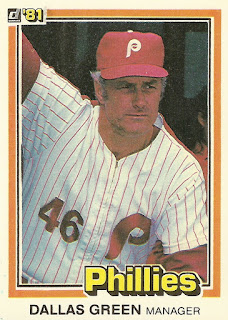 One Sentence Summary:  Vince Velasquez struck out seven, but the Phillies still dropped this game to the Yankees, 7-3.

What It Means:  Velasquez allowed five runs (four earned) on four hits in his 5 2/3 innings of work.

What Happened:  All three Phillies runs were driven in without hits - two sacrifice flies and a ground out.  Cesar Hernandez had a two hit game.

Featured Card:  Dallas Green, former Phillies pitcher and the manager who led the team to its first World Championship in 1980, passed away yesterday at the age of 82.  Paul Hagen penned a fitting tribute to Green on the Phillies website, pointing out that 46 of his 62 years in professional baseball were spent in the Phillies organization.

I could be mistaken, but I believe one of his final public appearances at Citizens Bank Park was back in 2014 when he helped induct Charlie Manuel into the Phillies Wall of Fame.  Green himself had been inducted in 2006, and the two legendary Phillies managers are the only two managers (to date) to lead the club to a World Championship title.

The Phillies family will miss the man they called Big D.