One Sentence Summary:  For the second night in a row, the Phillies couldn't hold off the Braves and sloppy defense led to a 6-4 extra-inning Braves win.

What It Means:  At least the crab fries were delicious.

What Happened:  With the Phillies up 4-3, Chase d'Arnaud hit a foul pop that Maikel Franco droppped.  d'Arnaud would walk and eventually come around to tie the score on an infield ground-out.  Edubray Ramos walked the lead-off batter in the 10th, and he would score the go-ahead run.

Vince Velasquez made his final start of the season.  In his post-game comments, manager Pete Mackanin announced that Velasquez would be shut down the rest of the year to preserve his arm for 2017 and future years.  He pitched well in his final start, allowing three runs (two earned) on five hits while striking out eight over seven innings.

Featured Card:  I also wanted to congratulate Reading outfielder Dylan Cozens who set the Double-A franchise's single-season home run and RBI records with 39 and 123 respectively.  He and Rhys Hoskins (37 home runs and 114 RBIs) have had monster years for the Fightin Phils. 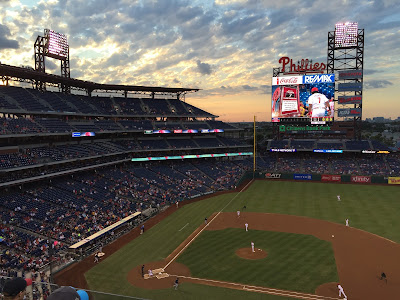 Field Report:  Doug and I were there along with about 5,000 of our closest friends and fellow die-hard Phillies fans.  It was actually a pleasant and enjoyable night at the ballpark, with the exception of the whole losing in the 10th inning thing.

Please vote in the poll on the sidebar if you haven't already.  Thanks!
Posted by Jim at 5:00 PM