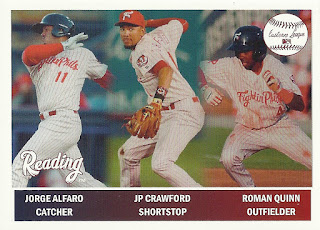 One Sentence Summary:  Roman Quinn recorded his first Major League hit - a two-run double - in the Phillies five-run second inning as the team went on to defeat the Pirates, 6-2.

What It Means:  I'm going to like this Roman Quinn.  He's got energy, he's fast, and he wears his socks pulled up extra high.

What Happened:  The big second inning also included a Freddy Galvis solo home run (18!) and an RBI-double from Cody Asche.  Quinn added a second double in the sixth inning.  Jeremy Hellickson won his 11th game by allowing just one unearned run on three hits over 6 1/3 innings.  The steady bullpen trio of Edubray Ramos, Hector Neris and Jeanmar Gomez preserved the lead and the victory.

Featured Card:  In the eighth inning, Jorge Alfaro pinch-hit for Neris, dribbling a ball up the third base line for his first hit in the Majors.  Given that both Quinn and Alfaro, two of the organization's top prospects, collected their first hits in this game, I thought this would be a fitting card.  The third player featured here, J.P. Crawford, should join Quinn and Alfaro in Philadelphia in 2017.

Please vote in the poll on the sidebar if you haven't already.  Thanks!
Posted by Jim at 8:30 PM