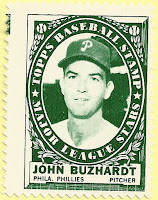 One Sentence Summary:  A dropped pop-up in the eighth inning led to the Marlins winning this game, 5-4.

What It Means:  This was an ugly loss for the Phils.  Cesar Hernandez drifted way over to first base on a pop-up that had been called by Tommy Joseph.  The two infielders collided, the ball was dropped and Marcell Ozuana, who had hit the pop-up, eventually came around to score the winning run.

What Happened:  Hector Neris was on the mound for that mess, and a batter earlier Neris had allowed a two-run home run to Christian Yelich.

Featured Card:  Thanks to a Tweet from Matt Gelb, I can feature this stamp of John Buzhardt who was the starting pitcher for the Phillies back on May 17, 1961.  The starting line-up fielded yesterday by the club was the first time the Phillies starting nine had all been under 27 years old since that date 55 years ago.  Here's a link to the full box score from that game.

Please vote in the poll on the sidebar if you haven't already.  Thanks!
Posted by Jim at 10:30 AM

Email ThisBlogThis!Share to TwitterShare to FacebookShare to Pinterest
Labels: 1961, Buzhardt

Heh heh, I guess Buzhardt could be considered the team's "stopper" that season.