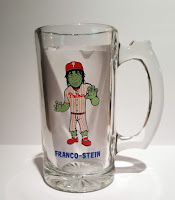 At the Ballpark:  The only give-aways for this series are available via special tickets for various theme nights.  The most intriguing item up for grabs is the Franco-Stein available on Wednesday as part of a Zombie Night promotion.

1970 Topps Appreciation:  Today's featured cards are for two players who both spent parts of their careers with the Expos and Phillies.

Adolfo Phillips played in parts of three seasons with the Phillies between 1964 and 1966, before leaving to serve as the Cubs' regular center fielder between 1966 and 1968.  With the Phillies, Phillips appeared in 56 games, hitting .223 before being included in the ill-fated (for the Phillies) Fergie Jenkins trade with the Cubs.  The Phillies outfield at the time was already occupied by Johnny Callison, Tony Gonzalez and Johnny Briggs.  Phillips was an original Expo in 1969, splitting center field duties with Ty Cline.  His sole Phillies baseball card can be found in the 1966 Topps set.