One Sentence Summary:  Jared Eickhoff had another solid start as the Phillies defeated the White Sox, 5-3.

What It Means:  The Phillies split the two-game series with the White Sox and after a day off on Thursday they'll open a weekend series at Citi Field with the Mets.

What Happened:  Eickhoff needed just 71 pitches to get through six innings, allowing four runs on two hits.  Cesar Hernandez (5) and Tommy Joseph (17) both homered for the Phillies.

Featured Cards/Field Report:  In our final trip of the summer, we took a two-day vacation to Washington D.C. on Wednesday and Thursday, visiting the historic sites and watching two Nationals-Orioles games.  Along with meeting each of the Racing Presidents, as commemorated on yet another very limited edition Chachi insert set, here were some of the other highlights from our trip. 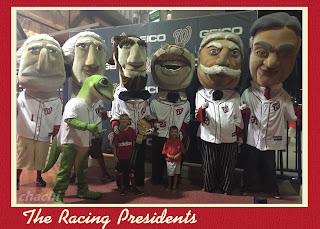 Please vote in the poll on the sidebar if you haven't already.  Thanks!
Posted by Jim at 7:00 AM