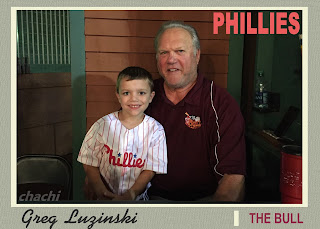 One Sentence Summary:  Jeanmar Gomez blew the save and then the Cardinals took the lead for good in the 11th, as the Phillies dropped a tough one, 4-3.

What It Means:  This would have been a really nice win.  Adam Morgan pitched very well (6 innings, 1 run on 5 hits) and was in line for his first win since May 10th.

What Happened:  With the score tied at one, Odubel Herrera (13) and Freddy Galvis (12) hit back-to-back home runs in the sixth inning.  The Cardinals tied it up in the bottom of the ninth when Jedd Gyorko hit a two-run home run off Gomez.  Randal Grichuk doubled home the eventual winning run off Frank Herrmann in the 11th.

He was very interested in the player's birthdays as they appeared on the scoreboard, and he was amazed that the game continued to be played in the middle innings despite the absolute downpour we were experiencing.  His favorite part of the game was the back-to-back home runs from Herrera and Galvis, although his favorite Phillies player is still Maikel Franco.  (His favorite non-Phillies player is still Ben Revere.)

As we were leaving, I spied a very lonely Greg Luzinski sitting in the corner of an empty Bull's BBQ and the Bull obliged us with a photo, hoisting Ben up on his lap.

Transaction:  In a somewhat surprising and seemingly unnecessary move, Emmanuel Burriss was recalled from Lehigh Valley prior to this game and Taylor Featherston was sent back down.

Please vote in the poll on the sidebar if you haven't already.  Thanks!
Posted by Jim at 7:00 PM

Awesome pic with the Bull!