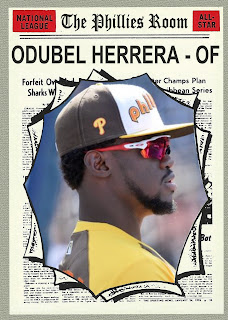 One Sentence Summary:  Eric Hosmer and Salvador Perez hit back-to-back home runs in the second inning as the American League won their fourth mid-summer classic in a row, 4-2.

What It Means:  It means the Phillies won't have home field advantage in the 2016 World Series.  I'll remember this game as it was the first that my wife and my two sons watched together.  Our youngest son Ben actually showed interest in the fact that players from all the teams were playing together. Doug managed to look up from his Topps Bunt App for the crucial moments of the game.

What Happened:  Hosmer took home MVP honors with two hits and two RBIs and Johnny Cueto was on the mound when the two Royals hit their home runs.  Kris Bryant provided a short-lived lead for the National League with a solo home in the first inning.  Mike Trout singled in the first inning to increase his All-Star Game hitting streak to five games.  David Ortiz appeared in his tenth and final game, as he's retiring following the season.

Will Harris struck out Aledmys Diaz in the top of the eighth inning, stranding the bases loaded for the N.L.  Zach Britton pitched a scoreless ninth inning for the save.

Featured Card:  The Phillies lone representative, Odubel Herrera entered the game in the bottom of the fifth taking over in center field for Marcell Ozuna.  He batted in the top of the sixth, flying out to center off the Royals' Kelvin Herrera.  He did not flip his bat.  His spot in the order came around again in the eighth, but manager Terry Collins opted to pinch-hit for him with Starling Marte.