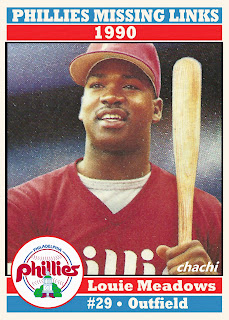 Louie Meadows served as a back-up infielder for the Houston Astros in parts of four seasons before being set free and signing with the Phillies in July 1990.  He spend July and August with the Scranton/Wilkes-Barre Red Barons before earning a September call-up.  Perhaps best remembered as the guy who actually appeared on Wes Chamberlain's original 1991 Topps card, Meadows only appeared in 15 games for the Phillies, going 1 for 14 (.071).  He never started a game for the Phillies, entering only as a pinch-runner, pinch-hitter or late inning defensive replacement.

He played part of the 1991 season with the Red Barons before calling it a career.

Phillies Career
15 games, .071 (1 for 14)
Acquired:  Signed as a free agent formerly with the Houston Astros, July 4, 1990
Debut:  September 5, 1990 - Pinch-ran for Ricky Jordan and scored a run on a Lenny Dykstra single
Final Game:  October 3, 1990
Departed:  Granted free agency following the 1990 season, but returned for the 1991 season to play for the Red Barons.  It's not clear when/how he ultimately left the organization.

These new Missing Links are looking good, Jim. I saw Louie Meadows and thought, "But I have that card." I forgot that it was We Chamberlain's card. Are there any missing links you needs photos of still? I can dig through some old programs.

Steve - I'm in need of photos for Manny Martinez, Glenn Dishman and Mike Robertson. Any help would be very much appreciated!

TSR - I thought the same thing . . . I'm sure at some point it was brought up as an interesting tidbit on an Astros or Phillies broadcast.